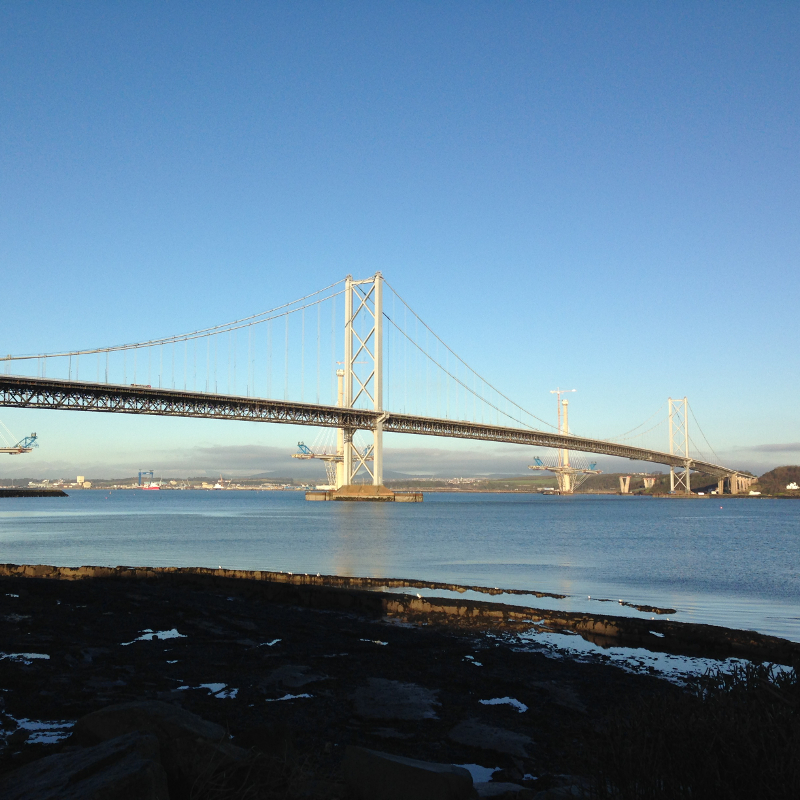 The bridge re-opened to all traffic on 20th February 2016. 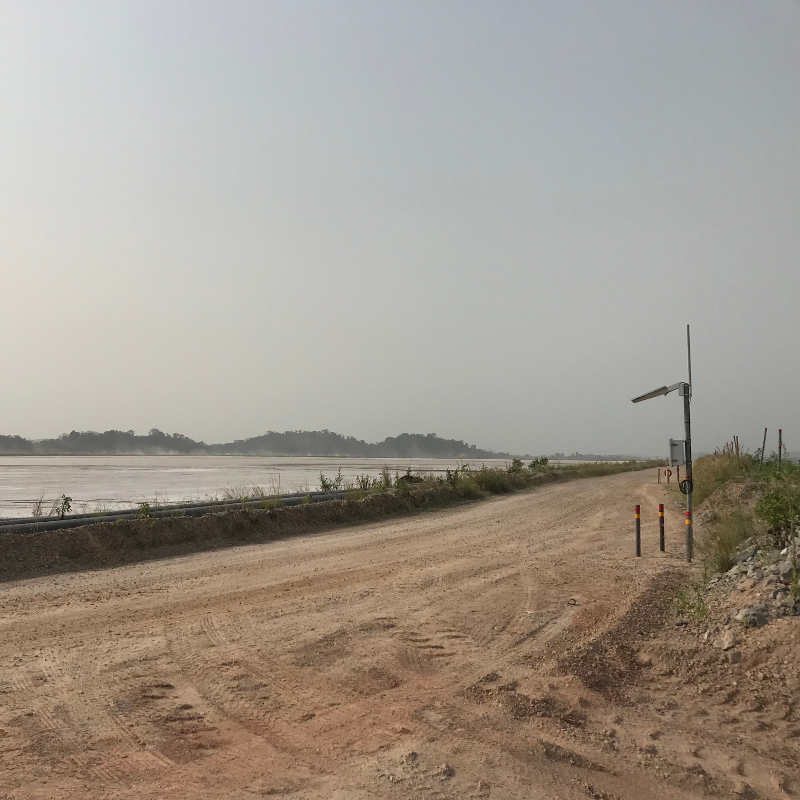 Upon recommendation by RST Instruments, R L Geotechnical Ltd. was contracted by AD Resources (Ghana) Ltd. to install 28no. vibrating wire piezometers at one of the Tailings Storage Facilities at the Tarkwa Gold Mine, operated by Gold Fields Ghana.

The vibrating wire piezometers were installed into standpipes, with the drilling and installation of these completed by AD Resources Ltd. prior to the arrival of R L Geotechnical Ltd. Each VW piezometer had it’s own RSTAR DT2011B Node which transmitted data via the RSTAR radio link to one of the two FlexDAQ Hubs, one installed at either end of the tailings dam. Each DT2011B was housed neatly within a secondary enclosure with enough cable left to allow for the dam to be extended upward in the future. Due to the great distances between the DT2011B Nodes and the FlexDAQ Hubs, Yagi antennas were used at some of the locations. these were mounted neatly onto the DT2011B secondary enclosure or on a pole next to it to ensure good a good signal between the DT2011B Node and its corresponding FlexDAQ Hub. 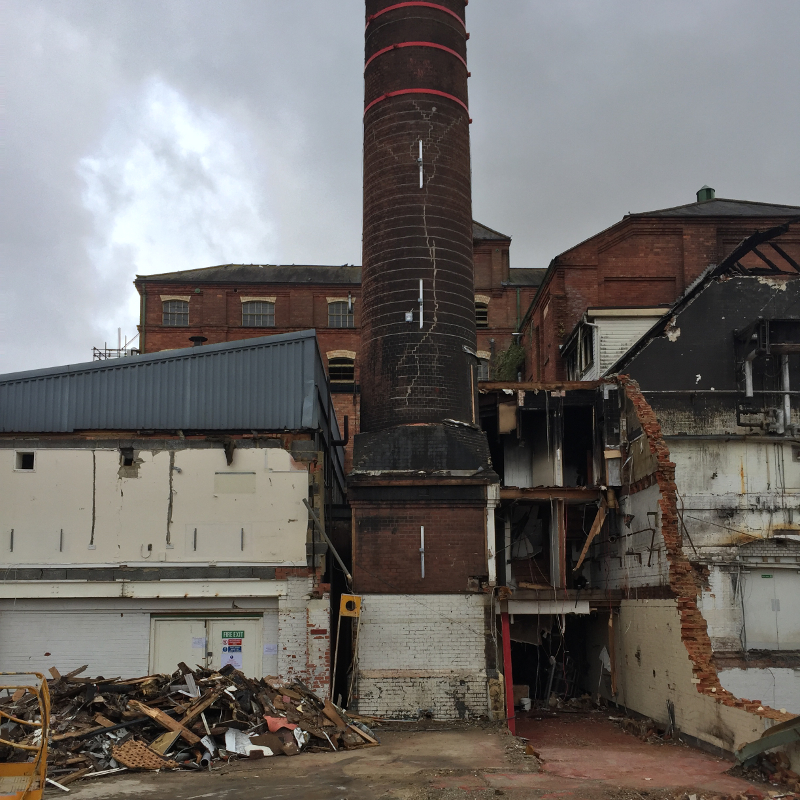 Part of an old brewery is being demolished to make way for residential properties. R L Geotechnical Ltd. was contracted by Hughes & Salvidge after referral from Crouch Waterfall to monitor the Grade II listed chimney which will be left in place.

A network of wireless tilt-meters were installed onto the chimney, and a vibration monitor at the base to monitor the stability of the structure and vibration during and post demolition. Installation was undertaken within a few hours, and data is accessed via web-based monitoring software with e-mail alerts to warn of excessive movement. 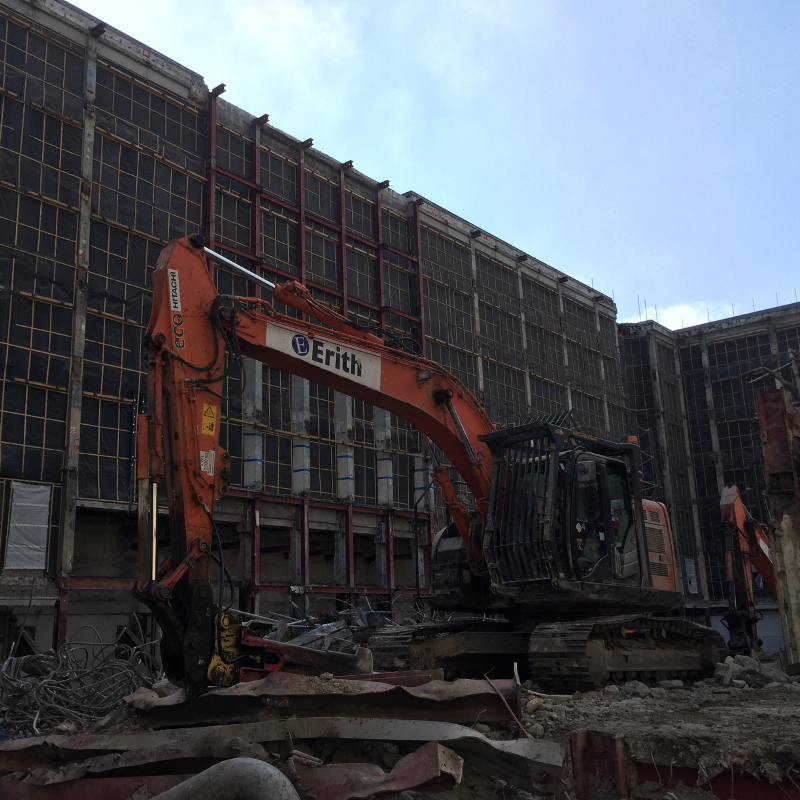 33 Grosvenor Place occupies a sensitive site within the City of Westminster. Originally built in the 1950’s , the challenge is now to transform the building into a private medical clinic. To achieve this, extensive modification of the building is required behind a retained façade. The core of the building will be entirely reconstructed to accommodate 200 beds and 8 operating theatres.

Erith were contracted to undertake the demolition of the core of the building and façade retention, and concurrent deepening of the existing basement. R L Geotechnical Ltd. were contracted by Select to supply and install a liquid levelling system to monitor settlement/heave of the façade. This would compliment the network of wireless tilt-meters installed by Select. 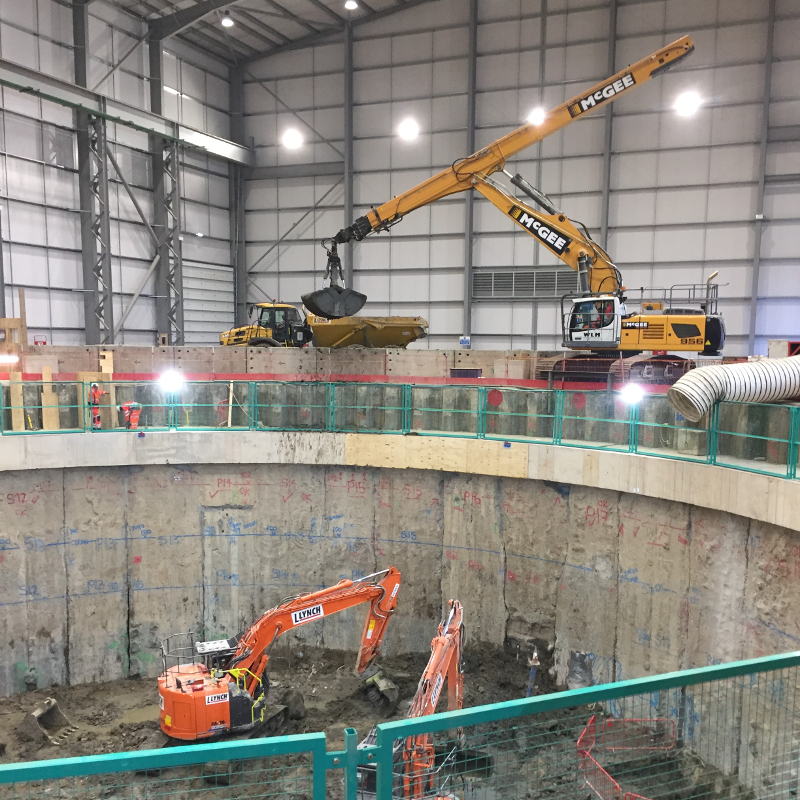 The Thames Tideway Tunnel is an upgrade to London’s sewer system to enable it to cope with it’s growing population. Starting in Acton, west London, the 25km Thames Tideway Tunnel will travel through the heart of London, for the most part following the route of the River Thames, at depths of between 30 and 70 metres, using gravity to transfer waste eastwards to Abbey Mills Pumping Station. Here it will intercept with the already completed Lee Tunnel which leads to Beckton Sewage Treatment Works. The Tunnel will connect to 34 of the most polluting combined sewer overflows, which currently release raw sewage into the River Thames during periods of heavy rain. It will intercept, store and ultimately transfer sewage waste away from the River Thames.

Ferrovial Laing O’Rourke JV (FLO) is the main contractor constructing the 12.7km Central section of the Tunnel which runs from Carnwarth Road to Chambers Wharf.

R L Geotechnical Ltd. has been assisting Select with some of the monitoring works for the Central section. 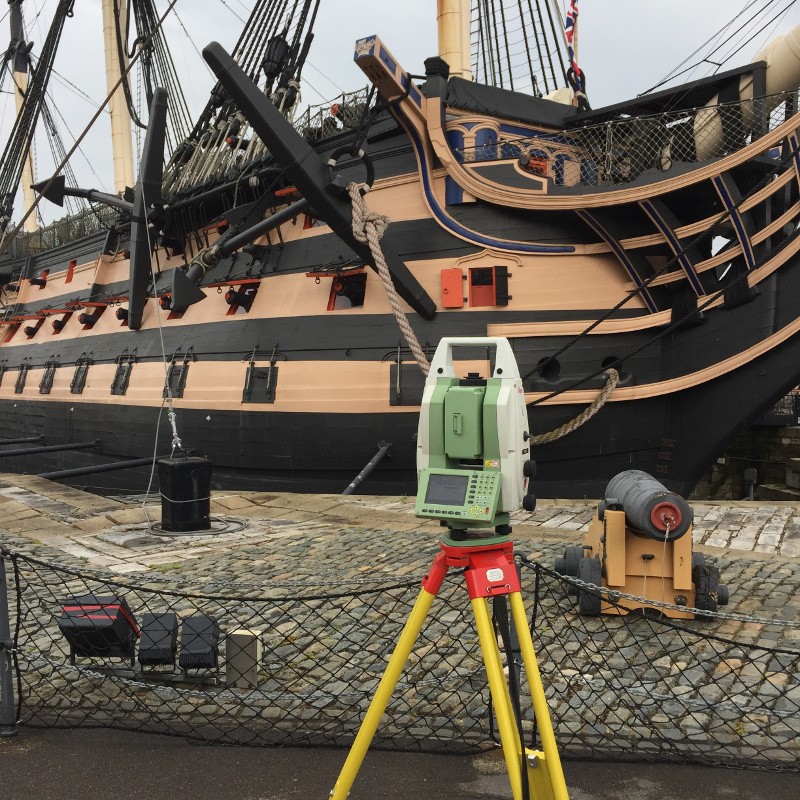 Built in 1759 HMS Victory is arguably the Royal Navy’s most famous warship. Best know for her role in the battle of Trafalgar, she currently has a dual role as the Flagship of the First Sea Lord and as a living museum to the Georgian Navy.

In May 2017 we were awarded the contract to carry out the bi-monthly movement monitoring surveys on HMS Victory. These readings compliment the automated monitoring in place within the ship. 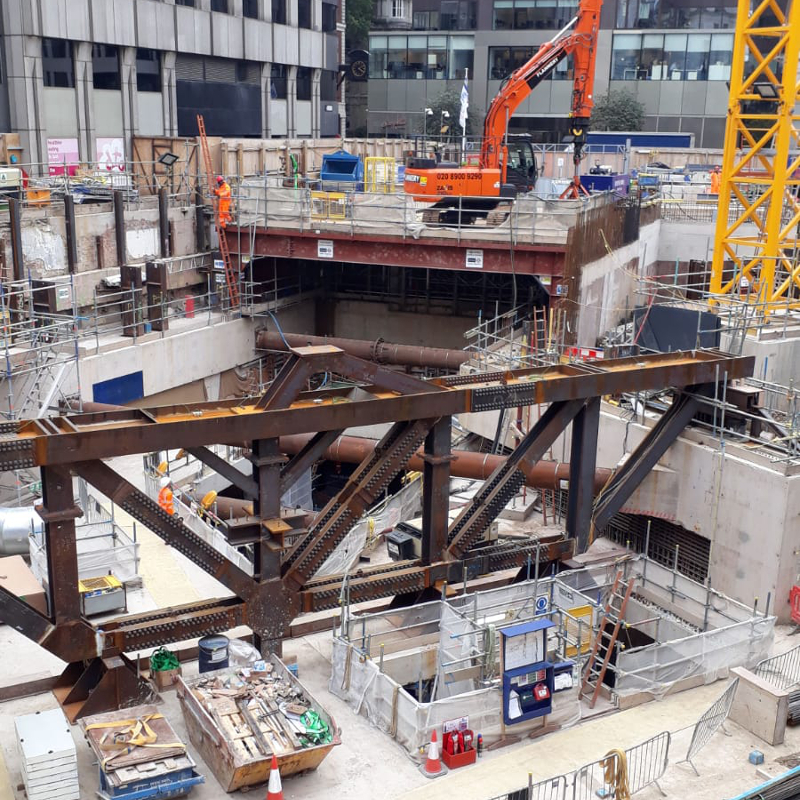 Bank is one of London’s busiest Underground stations and is currently being upgraded in order to increase capacity and relieve congestion within the station. The upgrade is costing over £600 million and involves digging over 600m of new tunnels and constructing a new station entrance.

Working closely alongside Geocisa since February 2017, R L Geotechnical Ltd. has assisted with various tasks on the Bank Station Capacity Upgrade (BSCU) project. We’ve undertaken installations on London Underground infrastructure, both in the running tunnels and the escalator chambers, installations and monitoring surveys in Thames Water Sewers, and installations in and around the new station box. 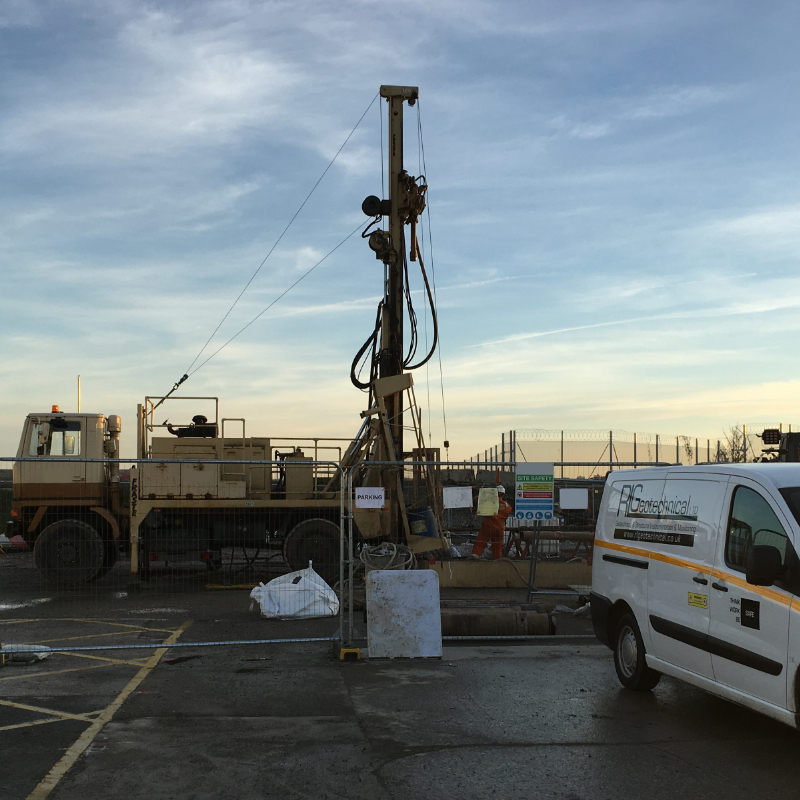 R L Geotechnical Ltd., upon the recommendation of Geosense, were employed by Fugro to provide training on the installation and subsequent reading of the rod extensometers. Due to a change in the design, modifications to the extensometers were required on site. 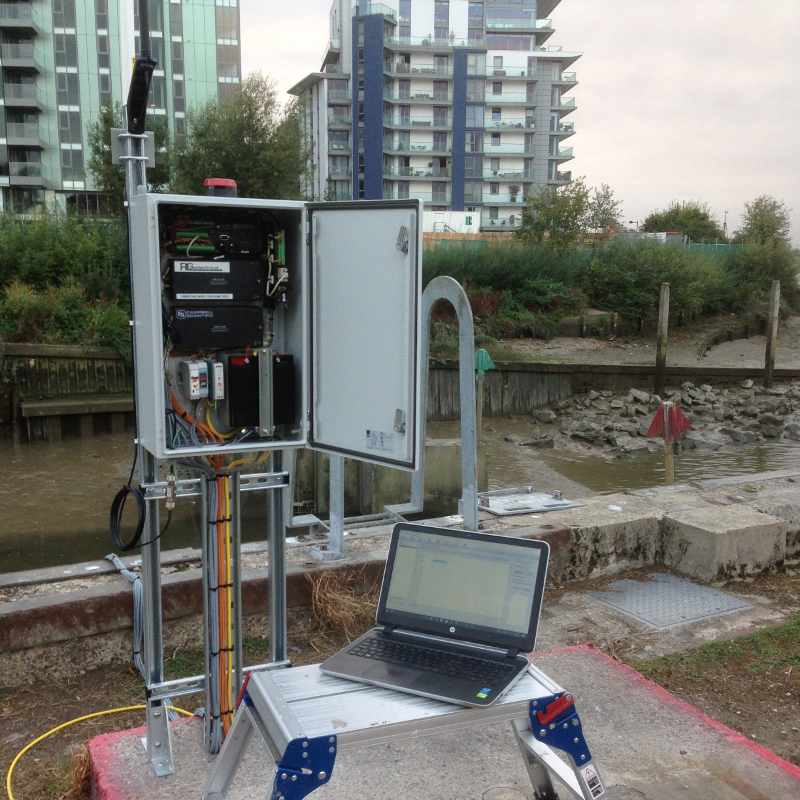 The River Wandle joins the River Thames on the Tideway and runs about 9 miles long throughout the southwest of London. A defunct half-tide weir that existed at the junction of the Wandle and the River Thames was hindering the river’s natural flow and biodiversity. With support from The Environment Agency, the Marine Management Organisation, and the Port of London Authority, the half-tide weir was set for demoltion to improve water flow, water quality, and restore lost wildlife habitats.

Land & Water were awarded the contract for demolition of the weir and the subsequent dredging works to clear the river upstream of the weir. There was concern that the weir had been supporting the retaining walls on either side of the river and that these could move during and post demolition.

R L Geotechnical Ltd. were contracted by Land & Water, after referral from Crouch Waterfall, to design and implement a monitoring scheme to monitor the retaining walls on either side of the weir prior to, during, and post demoltion for a period of up to 12 months.

Liquid levelling cells and tilt meters were installed on the concrete mass retaining wall on the east side of the weir to monitor settlement/heave and tilt. In addition a number of vibrating wire crack-meters were installed to monitor existing cracks in the wall. Submersible tilt-meters were installed on the sheet pile retaining wall on the west side of the weir to monitor tilt of the wall. Data from the tilt-meters on the west bank was sent via a radio link to a central datalogger located on the east bank. Data was then sent via GPRS to the web-based monitoring software. As well as e-mail alerts, there was also a visual alarm on site to alert the site team of excessive movement.

The installation was tricky and had to be undertaken by boat in line with the tides. There was also a lack of a permanent power source for the majority of the monitoring period, meaning that everything had to be powered by battery which was changed monthly.

Check out the ‘Customer Success Story‘ on the RST Insruments website!

We use cookies on our website to give you the most relevant experience by remembering your preferences and repeat visits. By clicking “Accept”, you consent to the use of ALL the cookies.
Cookie settingsACCEPT
Manage consent

This website uses cookies to improve your experience while you navigate through the website. Out of these, the cookies that are categorized as necessary are stored on your browser as they are essential for the working of basic functionalities of the website. We also use third-party cookies that help us analyze and understand how you use this website. These cookies will be stored in your browser only with your consent. You also have the option to opt-out of these cookies. But opting out of some of these cookies may affect your browsing experience.
Necessary Always Enabled
Necessary cookies are absolutely essential for the website to function properly. These cookies ensure basic functionalities and security features of the website, anonymously.
Functional
Functional cookies help to perform certain functionalities like sharing the content of the website on social media platforms, collect feedbacks, and other third-party features.
Performance
Performance cookies are used to understand and analyze the key performance indexes of the website which helps in delivering a better user experience for the visitors.
Analytics
Analytical cookies are used to understand how visitors interact with the website. These cookies help provide information on metrics the number of visitors, bounce rate, traffic source, etc.
Advertisement
Advertisement cookies are used to provide visitors with relevant ads and marketing campaigns. These cookies track visitors across websites and collect information to provide customized ads.
Others
Other uncategorized cookies are those that are being analyzed and have not been classified into a category as yet.
SAVE & ACCEPT
Powered by